Spanning a period of roughly two and half decades in the mid-20th century, Mid-Century Modern design reflects the radical developments that occurred in design, architecture and urban development to propel post-war America into the modern era. Interior and architectural design was influenced by the availability of new materials after the war such as steel, glass and plywood, combined with developments in mass production and technology. The result was an emphasis on function over ornamentation, which produced a design style that was pared back, fresh and refined.

The key dicta “form follows function” (Louis Sullivan) and “less is more” (Mies Van Der Rohe) set the tone for the style’s sense of minimalism, while designs were characterized by sweeping horizontal planes, rectilinear forms, flat roofs, expansive windows, linear details and smooth rendered walls. These features emphasised light, volume and openness, and in particular, fostered connection to the outdoors. The style celebrated “truth to materials”, employing a simple and honest palette of stone, timber, glass and render, while also favouring the purity of white. Mid-century modern design is exemplified by the iconic designs and philosophies of the mid-20th century that have an enduring influence in contemporary design today. 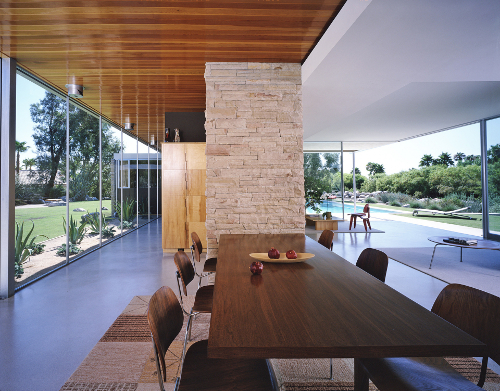