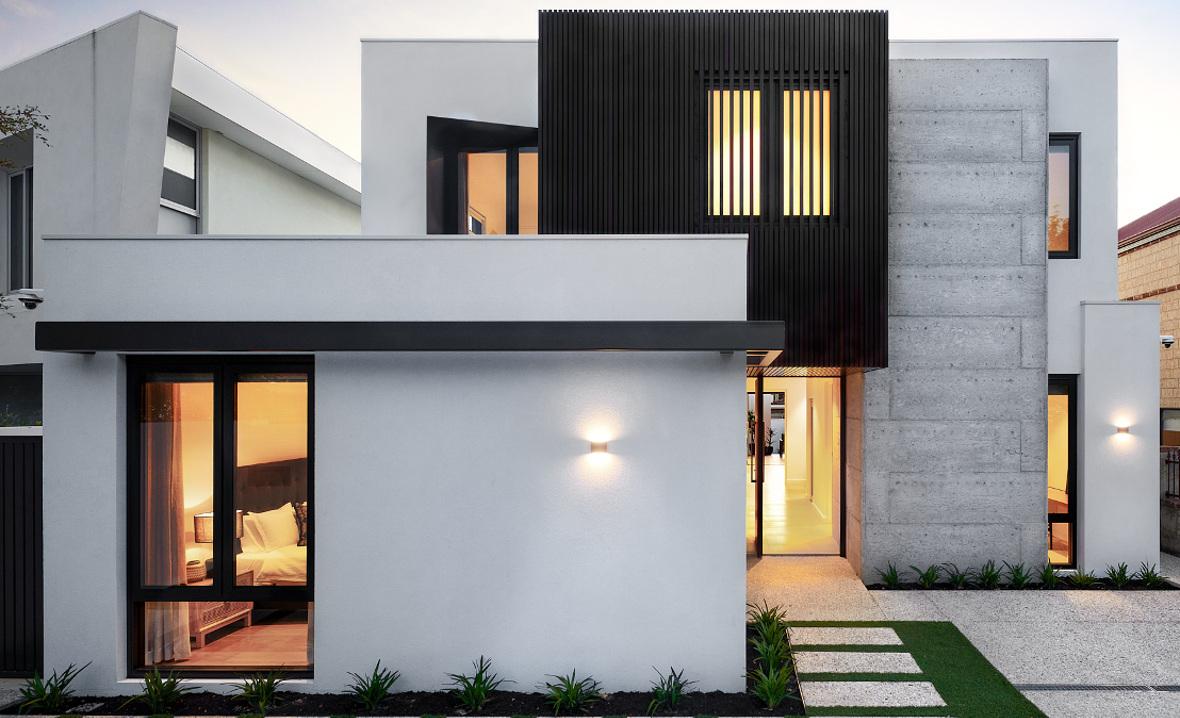 Humphrey Homes Owner Dean Humphrey said the South Perth residence needed to provide its owners with an effortless lifestyle, one which prioritised functionality and entertainment.

“The contemporary three-bedroom, two-bathroom home, cubic in its form with a distinct character and bold aesthetics, is perfectly representative of how this couple like to live,” he said.

While the mature-aged couple wanted to downsize, they did not want to downgrade, and Mr Humphrey said the home showcased how to live large on a smaller lot.

“The brief called for clever zonings and a sense of space and light that belied its compact 12m-wide block,” he said. “The clients are protective of their privacy, but at the same time they did not want to feel boxed in.

“This was achieved by delivering a liveable, light and bright home that uses the courtyard to provide every room with a connection to the outdoors.”

“We built a downsizer specifically for us in that we wanted our entire living area, including the master bedroom, on the ground level,” they said.

“Taking the design over two levels was a purposeful consideration on zoning and functionality, so that there are dedicated spaces for everyday living and private retreats,” he said.

Mr Humphrey said designing the two-storey residence responsively to the block was key. This allowed the generous northern light to penetrate through strategically positioned windows and breezeways to respect solar-passive principles.

“A dramatic entrance hall with an open stairwell is a welcoming feature, and a decision was made to include a lift for added liveability, particularly as the clients age,” Mr Humphrey said.

“Because the home merges solar access and ventilation, it connects to the outdoors with courtyards for year-round alfresco living, delivering a permanent sense of relaxation.”

While the home is simple in concept, Rob and Kathy sought a strong and dramatic presence.

“Although a relatively small home, there is a level of detail that required careful consideration in design and supervision,” they said.

The texture of rammed concrete was used on the front elevation for a raw and robust finish, paired with a bespoke wall made from cedar batons. This elevation cocoons the study at the front of the home and insulates via excellent thermal properties.

Sustainability was further incorporated through the orientation of the build, speaking to solar-passive principles via northern light and ventilation. Behind the elevation, the windows open inwards, allowing light and breezes to be drawn inside while maintaining privacy from the street – a popular feature across Europe.

Mr Humphrey said the interior design became more relaxed and calming as you moved through the dwelling.

“The home is built for entertaining around the rear courtyard and free-form living that connects the kitchen to the main living zones,” he said.

“A sense of space is exaggerated, with almost 3m-high ceilings and stacker doors opening to the courtyard without a central corner column. A flush internal and external floor surface with recessed door sills allows seamless indoor-outdoor living.

“It is a home built for today, but will grow and evolve with this couple over time as their needs change.”

Want to know more?  Check out more on this home including the full gallery, see what others are saying on our testimonials page or join the conversation on Facebook, Instagram or say hello today.

This story first appeared as a cover story in The West Australian's New Homes liftout on June 6, 2020.  Read it here.