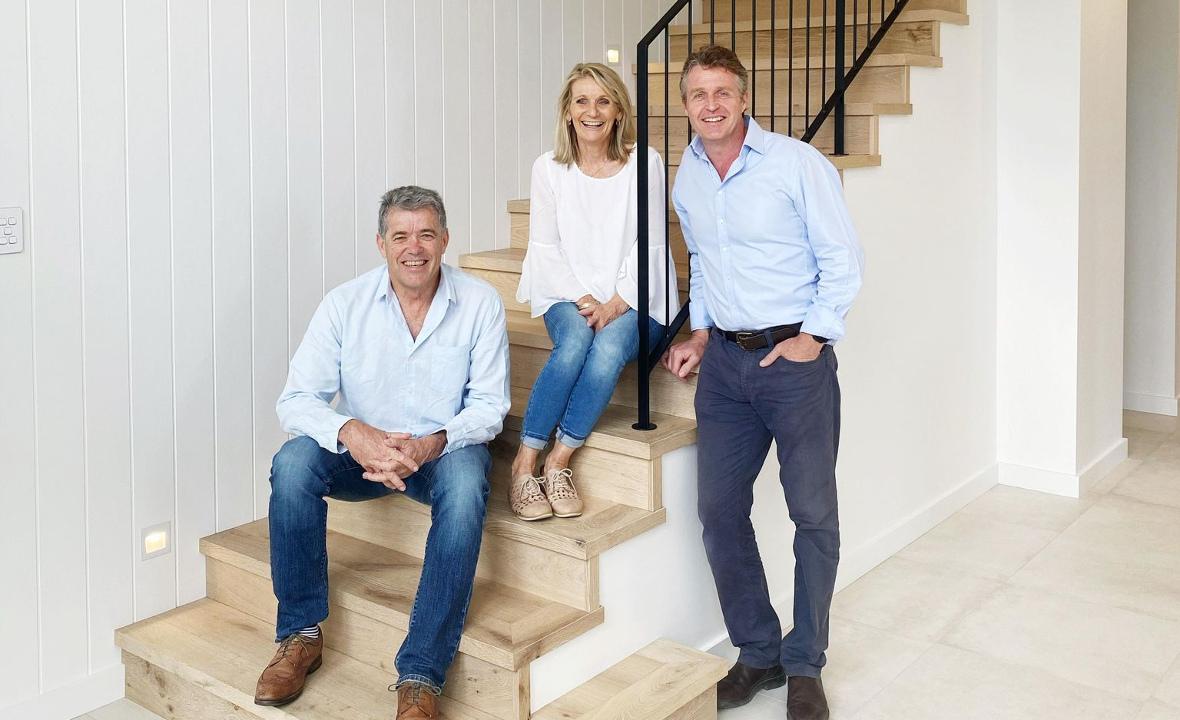 Completed in mid-December, the three-bedroom, two-bathroom abode was built by Humphrey Homes, an architect and builder Wayne and Kylie have a 20-year-history with.

The Swanbourne sanctuary is the fourth project the couple have completed with Humphrey Homes, following a Subiaco-based timber and tile carport in 1992, a two-storey extension in 1997 and a large family home in Swanbourne in 2008.

Wayne said their current home, a downsizer property, would be their last.

“We sold our previous home, which was our large family home, and wanted something more manageable as it is just now the two of us,” he said.

“We looked to buy and couldn’t find anything to suit, so we got in touch with Humphrey Homes again, secured this block in Swanbourne and went from there.”

Wayne and Kylie worked closely with the architect and in-house interior designer at Humphrey Homes to develop the internal aesthetic, a modern white-toned space which is light, bright and reminiscent of the Western Australian coastline.

“This home can best be described as coastal casual,” Kylie said.

“We wanted large windows in the front so the house would be filled up with northern light.

“We also like the look of our flat roof, which is modern, works with the design and is a bit more urban, which is what we wanted.”

The home’s beachy, relaxed feel is aided by the clever design used to situate it comfortably on its relatively small 306sqm block.

The house has well-organised spaces, with two separate living zones, two outdoor areas, a home office and heaps of storage.

A high 6m void representing connectivity between the upper and lower floors of the home gives the aesthetic and intriguing flair of drama, as does the internal terrace overlooking the downstairs and outdoors.

Built like a home within a home – where downsizers can live comfortably and host guests – Kylie and Wayne said it was their dream property.

“This is our forever home,” Wayne said.

“We love the location and we love that this is an entertaining home.

“While it has been designed just for Kylie and I, there is room for the family when they visit, so we love that flexibility and clever design too.”

For Perth buyers considering undertaking their own homebuilding journey, Wayne and Kylie recommended taking the time to find a builder that could be trusted and easily communicated with.

Kylie said the continued high quality of work and service provided by Humphrey Homes meant it was easy to choose them for their Swanbourne project, describing their approach as upfront, honest and fair.

She said she felt it had always been a team effort and an excellent result.

“We have loved every project they have done for us over the years,” Kylie said.

Want to know more?  Check out more on this home including the full gallery, see what this client and others are saying on our testimonials page or join the conversation on Facebook, Instagram or say hello today.

This story first appeared in The West Australian's New Homes liftout on January 16, 2021.