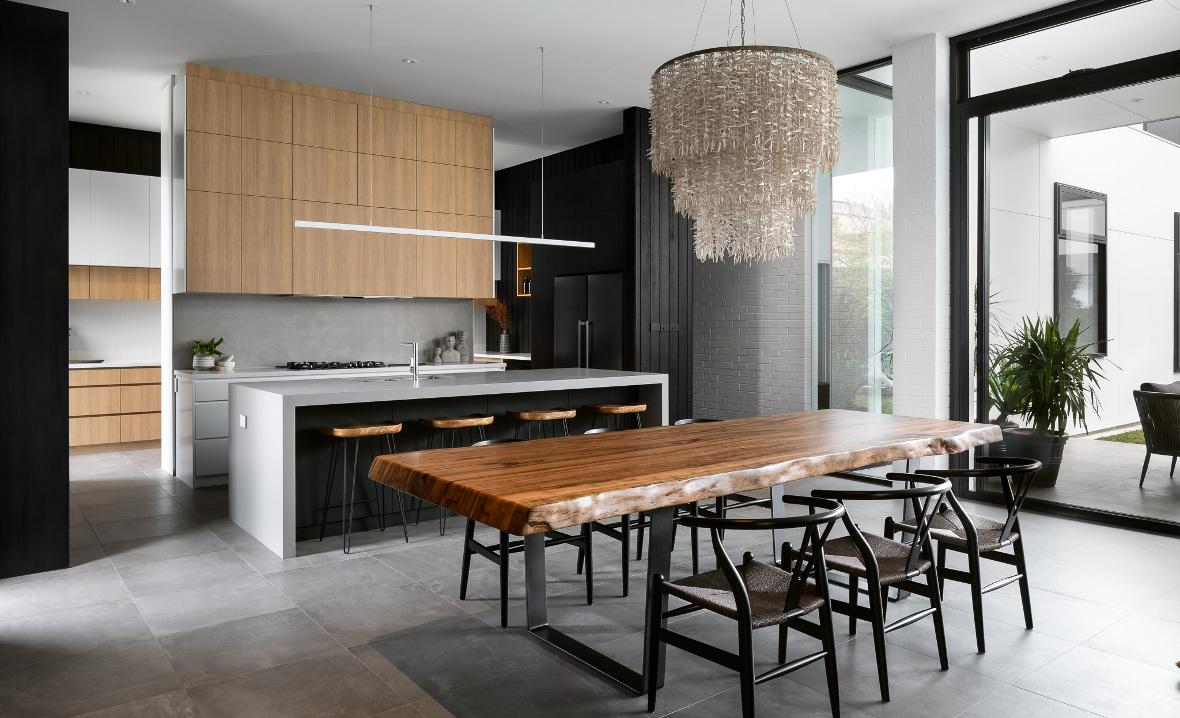 Raw materials and robust finishes are defining features in this bold custom build at Mosman Park.

Completed by Humphrey Homes, the four-bedroom, four-bathroom home hints at mystery and intrigue from the street and is deliberately very private at the request of the owners.

A large cantilevered box housing the kitchen, scullery, dining and main living zone seemingly floats at the front of the home, creating plenty of wow factor.

Adding to its dramatic effect, the box is sheathed in shou sugi ban, an ancient Japanese timber treatment practice which roughly translates to burnt cedar wood.

Through this inclusion and other standout features which flow throughout, Humphrey Homes has designed this custom build to capture and embrace the elements.

The builder said earth was shown through the grounded form, with solid concrete expressions including hand-cast floating concrete steps to the entry, fire in the warmth and intensity of the frontage and a fire pit to the alfresco, water via cooling tiered ponds which face out to the street, and air through the open nature of the home which allows the breeze to flow through the living areas.

Fundamentally though, it is a private family home which presented its fair share of opportunities and obstacles through the building process.

Humphrey Homes Architect Helen Marchesani and the builder’s team had the challenge of making the home work on a site which sloped 5m from back to front.

As a result, the home is anchored with an off-form concrete retaining wall which contrasts with the floating charred finish of the box above.

Ms Marchesani said maximising the site had been a focus throughout.

“At its core this is a terraced home purposely designed to speak to the site and that engages with the outdoors in the central level,” she said.

“It embraces as much northern light as possible, and strategic window placement catches cooling summer breezes.”

Humphrey Homes Owner and Director Dean Humphrey said for its big street impact, the project was a robust build honest to its ultimate purpose.

“I first came across shou sugi ban on a research trip overseas, and after showing it to the owners of this property during the design stage, we decided to bring the practice to Western Australia,” he said.

“Using it in this way provides a visual drama; it’s a material not often seen on custom builds in Perth, and it is highly functional too.”

Located in Mosman Park, the private home will be open for public viewing at an exclusive Open House event over the next two weekends; Saturday October 26, Sunday October 27, Saturday November 2 and Sunday November 3 from 11am-3pm, or by appointment.

This story first appeared in The West Australian's New Homes liftout on October 5, 2019.