Understated yet luxurious from front to back 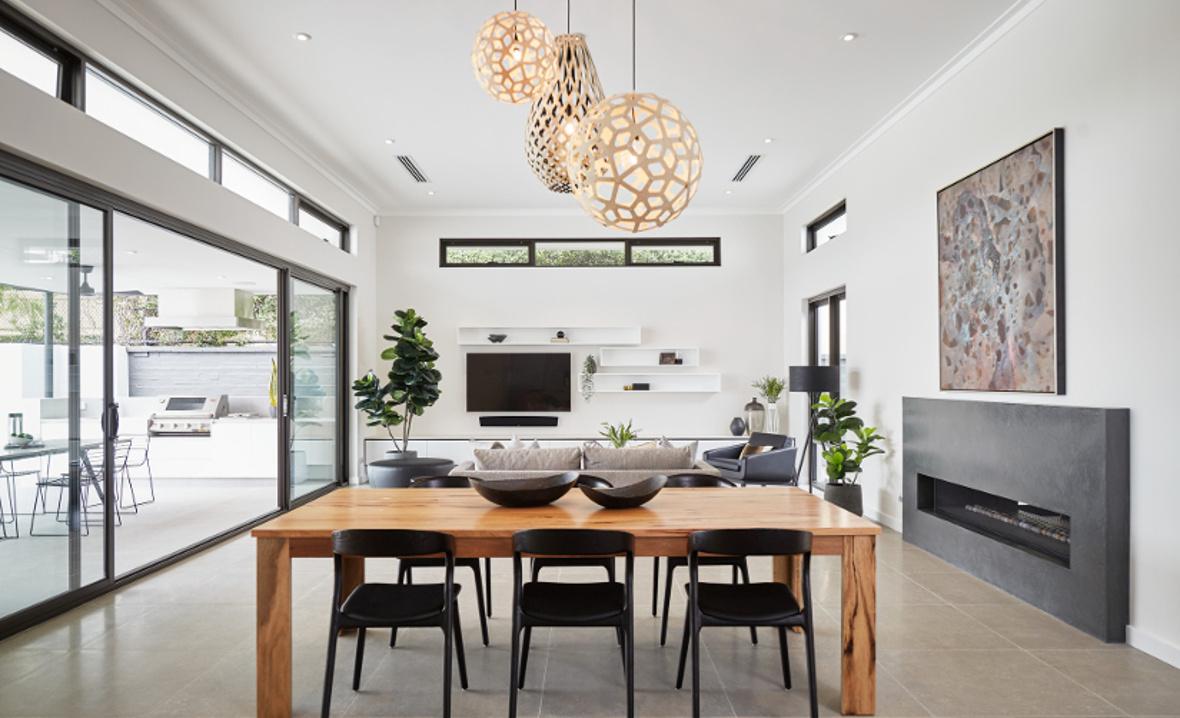 This Dalkeith custom build by Humphrey Homes exudes a simple elegance and seamless connection between its lightfilled spaces.

The 470sqm four-bedroom two-and-a half-bathroom home is a careful blend of architectural functionality and a luxurious aesthetic.

“The elegance of the home and its purposeful understated simplicity is what speaks the most,” Humphrey Homes Owner and Director Dean Humphrey said.

“It stands out because of its intentional non-fussiness.”

A nearly 50m-long block meant special considerations needed to be adhered to in the build, with visual lines from one space to another especially important.

“The home started as a hand sketch by our in-house architect Helen Marchesani and was built in 14 months, including all landscaping and gardens, carpets and window treatments,” Mr Humphrey said.

“The design was responsive to orientation and solar-passive principles to ensure function and light were maximised.”

Included in the build are some special features, according to Mr Humphrey, such as hydronic underfloor heating built into the concrete slab.

“The slab is a great form of thermal mass which retains warmth on cold days and releases it slowly, making the whole house warm,” he said.

Other features include a double-sided fireplace finished in a darkened polished plaster, 3.6m-high ceilings and a timber pivot entrance door with mirrored panel inserts.

The outside areas speak to the interior, as they connect the two living zones, according to Mr Humphrey.

“This was done both in the architecture and interior design, as the monochromatic palette visually joins the two areas,” he said.

“We created two courtyard areas: one off the master and another off the living.

“There is a purposeful visual permeability from the master suite at the front of the home to the children’s wing at the rear, and the configuration of the courtyards allows that to happen.”

While the home is connected throughout, it has clear zones.

“The front is a retreat for the parents, with the master suite, dressing room, ensuite and study, and the rear is for the children, with extra bedrooms, bathrooms and an activity space,” Mr Humphrey said.

The family’s previous home was very boxy and dark and so a key part of their brief was to produce architecture that drew the outdoors in.

“The hub of the home is the galley-style kitchen and scullery connected with a voluminous living and dining area that brings the two opposing zones together so well.”

With the client looking for understated design and functionality, Mr Humphrey said a visit to their previous home pointed the way forward.

“They wanted a functional family home that was contemporary and reminiscent of a modern single-storey Californian bungalow,” he said.

“They wanted a pitched roof that felt in place in the current Dalkeith streetscape, but also wanted a home that made a statement in its simplicity and strength, with a pared-back design.

“The family’s previous home was very boxy and dark and so a key part of their brief was to produce architecture that drew the outdoors in.

“What we did was meet them at their original home and took tape measurements to determine current room configurations and volumes.

“We used that as the basis to determine this design.

“The end result is a home that is very responsive to its environment, making the most of its solar orientation and block configuration.”

This story first appeared in The West Australian's New Homes liftout on April 13, 2019. 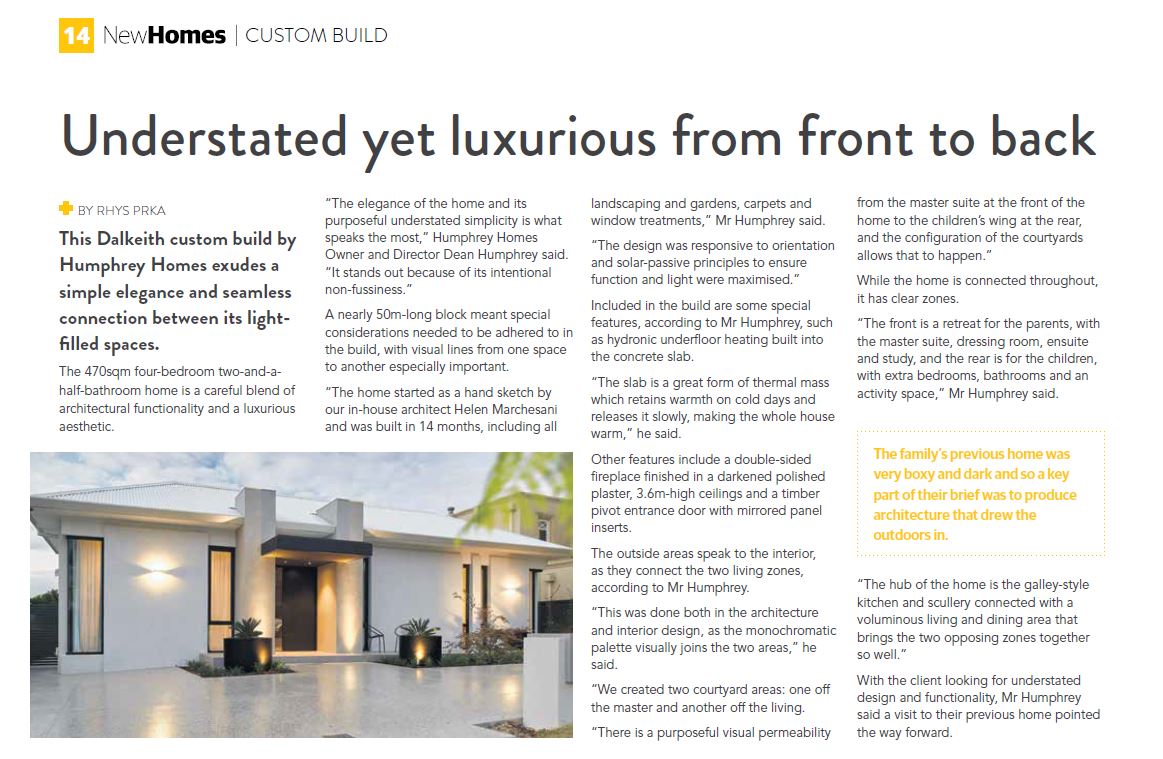 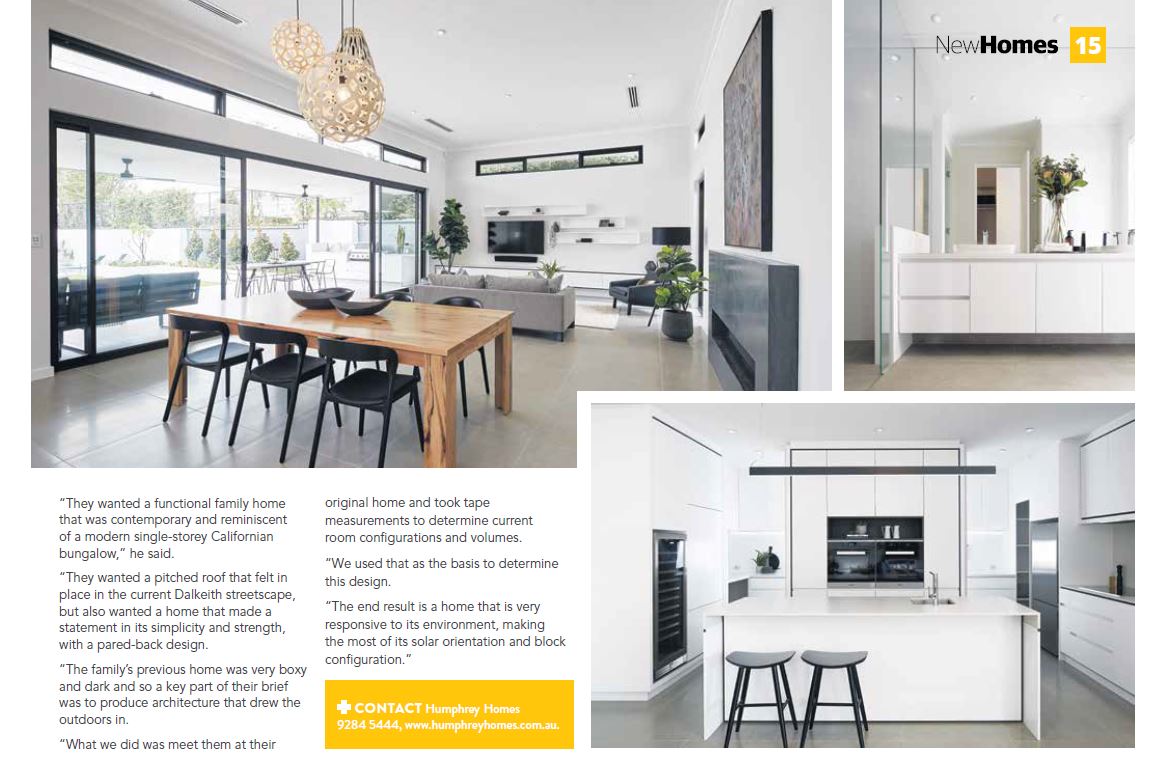