Wabi sabi: what it is and why a Perth architect is using it

When building or designing your home, traditional wisdom dictates you pay excruciating detail to every little part to make sure everything is perfect.

However, there is a new trend in town encouraging you to do the exact opposite – to forget about perfection and embrace imperfection instead.

Wabi sabi is a Japanese aesthetic that encourages imperfections as commonly seen in nature.

“Wabi sabi is all about embracing imperfections in design and when used correctly it can have a striking effect. It is about adding character and personality to a home,” Humphrey Homes Owner and Director Dean Humphrey said.

“Because it is a discipline that accepts and encourages beauty in its purest form, the result is a deeply personal, organic aesthetic.”

Wabi sabi can be introduced into a home in a number of ways.

“For a large-scale effect, consider using recycled bricks in a feature wall, or rammed concrete instead of a traditional render or plaster,” Mr Humphrey said.

“Recycled timber such as railway sleepers often have unique imperfections. They can be upcycled and turned into feature pieces such as benchtops, pillars or balustrades.

“Smaller applications could be asymmetrical tiling, uneven rocks or chipped porcelain in a bathroom, for example.

“If you are looking for a less permanent adaptation, consider items like rustic pottery bowls, coffee tables made using resin that often contains insects inside or faded pieces of materials as pieces of art.

“We are currently building a home in Mosman Park that is using 6000 recycled bricks and the texture, colour and history of those is a great testament to the wabi sabi movement.

“The bricks have been cleaned by hand; they are raw and rustic and because they are not mass-produced, there is a uniqueness to each and every one.”

Mr Humphrey said wabi sabi was about embracing the quirky nature of organic materials and could be applied to almost anything – but most commonly to timber, concrete, ceramic, stone and cloth.

Wabi sabi was great way to add some character to your home to stand out from the rest, according to Mr Humphrey.

“It is essentially the opposite of today’s sleek, stark and copycat culture,” he said.

“It is unique and reflective of a particular moment in time and that by its very nature brings character.

“One home we are building now uses a technique of charring timber to allow the grain to develop natural patterns and develops detail in varying shades of black.

“The result is a bold and striking aesthetic that adds a sense of mystery.”

Mr Humphrey invited people to try something new and to trust their instincts.

“Remember that there is beauty in difference,” he said.

“Wabi sabi is about challenging the norms of the ‘perfect ideal’ which are often held en masse as society’s perceived view of what a home should be.

“Sometimes being different is good.”

A version of this story first appeared in The West Australian's New Homes liftout on March 16, 2019. 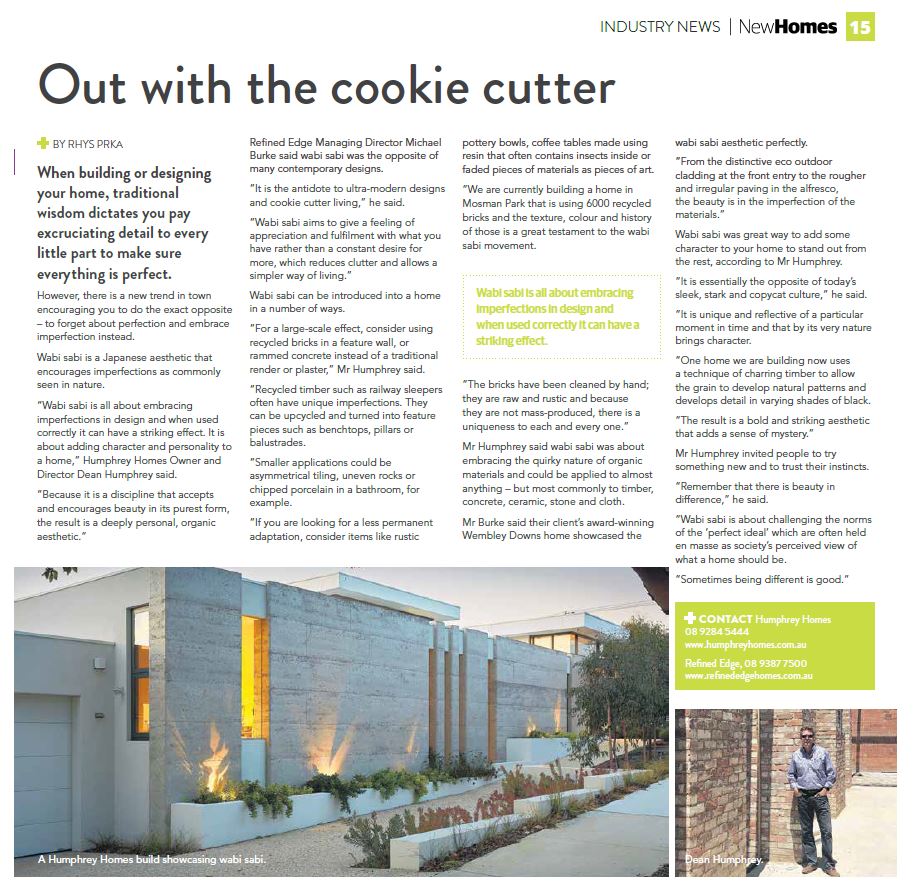